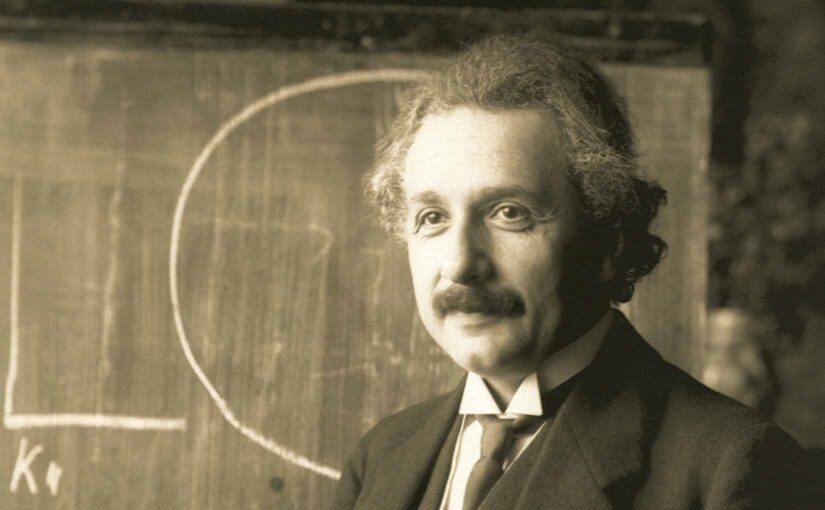 If you can’t explain it simply, you don’t understand it well enough.

Albert Einstein was a renowned German-born theoretical physicist and one of the most influential scientists of all time. He is best known for developing the theory of relativity, which revolutionized the understanding of space and time, and his mass-energy equivalence formula E=mc2, which has been dubbed “the world’s most famous equation”. He also made significant contributions to the development of quantum mechanics and his work had a profound impact on the philosophy of science. In 1905, Einstein published four groundbreaking papers that outlined the theory of the photoelectric effect, explained Brownian motion, introduced special relativity and demonstrated mass-energy equivalence. Throughout his career, Einstein attempted to unify the laws of physics and opposed the probabilistic nature of quantum mechanics. He left Germany in 1933 due to the rise of the Nazi regime and later became an American citizen. He also played a key role in warning the US government of the potential dangers of nuclear weapons during World War II.

Albert Einstein was born on March 14, 1879 in Ulm, Germany, into a family of Ashkenazi Jews. His parents, Hermann Einstein and Pauline Koch, later moved the family to Munich where they owned an electrical equipment manufacturing company. As a child, Einstein attended a Catholic elementary school and later a gymnasium where he received advanced education. However, he clashed with the authorities and resented the strict rote learning method. In 1894, his family’s company faced financial difficulties and they moved to Italy. Einstein stayed behind in Munich to finish his studies, but later joined his family in Italy. From a young age, Einstein excelled in math and physics, teaching himself advanced concepts and even independently discovering a proof of the Pythagorean theorem. He also had a strong interest in philosophy, particularly the works of Kant. Despite failing the entrance exam for a polytechnic school in Switzerland, he received exceptional grades in physics and mathematics and was eventually admitted.

In 1900, Einstein published a paper on capillarity phenomena and in 1905, at the age of 26, he published four groundbreaking papers on the photoelectric effect, Brownian motion, special relativity, and the equivalence of mass and energy, which brought him to the attention of the academic world. This year is often referred to as his “annus mirabilis”. He received his PhD from the University of Zurich in 1906. By 1908, Einstein was recognized as a leading scientist and was appointed lecturer at the University of Bern. He was later appointed associate professor in 1909, and full professor at the German Charles-Ferdinand University in Prague in 1911. He returned to his alma mater in Zurich in 1912, where he was a professor of theoretical physics until 1914. In 1913, he was offered a position at the Prussian Academy of Sciences and the University of Berlin, which he accepted and moved to Berlin. He became director of the Kaiser Wilhelm Institute for Physics and was elected president of the German Physical Society from 1916 to 1918. In 1919, observations of a solar eclipse confirmed his theory of the bending of light by gravitation.

In the spring of 1925, Einstein traveled to South America, spending a month in Argentina, a week in Uruguay, and a week in Rio de Janeiro, Brazil. His trip was organized by Jorge Duclout and Mauricio Nirenstein, with support from Argentine scholars and funding from the Council of the University of Buenos Aires, the Asociación Hebraica Argentina and the Argentine-Germanic Cultural Institution.

In December of 1930, Einstein made a second trip to America, originally planning to spend two months as a research fellow at the California Institute of Technology. Despite the high level of public attention he had received during his previous visit, he and his team sought to protect his privacy by declining all public speaking engagements and awards. Upon arriving in New York City, Einstein was taken on a tour of various places and events, including Chinatown and a performance at the Metropolitan Opera, where he was cheered by the audience. He also met with the mayor and president of Columbia University, and visited a church that had erected a statue of him at the entrance. Einstein then traveled to California, where he met with the president of Caltech, Robert A. Millikan, though their friendship was reportedly “awkward” due to their differing views on militarism. During a speech at Caltech, Einstein emphasized the potential for science to cause harm. Einstein also formed friendships with author Upton Sinclair and film star Charlie Chaplin, both known for their pacifist views. He was given a tour of Universal Studios by the head of the studio, Carl Laemmle, and was introduced to Chaplin, with whom he had an instant connection. Chaplin invited Einstein and his wife to his home for dinner and to the premiere of his film City Lights in Hollywood, where they were greeted as special guests.

In 1933, as the Nazis rose to power in Germany, Einstein knew he could not return to his home country. He and his wife Elsa returned to Europe, but upon learning of the Enabling Act, which gave Hitler’s government dictatorial powers, and the persecution of Jews in Germany, they decided not to return to Berlin. Einstein renounced his German citizenship and his works were targeted in the Nazi book burnings. He was also included in a list of enemies of the regime with a bounty on his head. Fearing for his safety and that of other Jewish scientists, Einstein sought help from the Academic Assistance Council and was able to leave Germany. He spent some time in Belgium and England, where he met with political leaders and advocated for the rescue of Jewish scientists still in Germany. He eventually moved to the United States, where he became a citizen and continued his work in physics.

Einstein was a political and social activist throughout his life, holding views that leaned towards socialism and critical of capitalism. He advocated for a democratic global government and was a strong supporter of world peace. He was a founding member of the German Democratic Party and greatly admired Mahatma Gandhi, with whom he exchanged letters. Einstein’s views on Zionism were complex, he helped establish the Hebrew University of Jerusalem and supported the idea of Jews and Arabs living together in Palestine, but was against the creation of an independent Jewish state. He had a deep understanding of the need for human rights and was very critical of the Nazi regime’s treatment of Jews and other groups. Einstein also had deep philosophical and religious views and was an advocate of the idea that science and religion should coexist. He believed that religion and science have different realms of understanding, but both are necessary for a well-rounded understanding of the world. He also expressed that science alone cannot provide a sense of meaning or purpose in life.

Albert Einstein was a physicist who made significant contributions to the field of thermodynamics, statistical physics, and the theory of relativity. In 1900, he submitted his first paper on capillary attraction, which was published the following year. In 1902-1903, he published papers on thermodynamics that attempted to interpret atomic phenomena from a statistical point of view, laying the foundation for his 1905 paper on Brownian motion. He also studied the effect of finite atomic size on diffusion phenomena. In 1905, Einstein published “Zur Elektrodynamik bewegter Körper” (“On the Electrodynamics of Moving Bodies”), which became known as his special theory of relativity, reconciling conflicts between Maxwell’s equations and the laws of Newtonian mechanics. He also developed the theory of general relativity between 1907 and 1915, which explained the observed gravitational attraction between masses as the warping of space and time by those masses.